For international visitors who are unsure, Wales is in the UK. And the Maine Coon Cat Club which was established in 1985 and is affiliated to the GCCF (the premier cat Association in the UK) have three purebred, rescue Maine Coon cats up for adoption.

The first one lives in Swansea and the owner is giving up their Maine Coon whose name is Aurora because her resident cats will not accept her and she will not accept them. The owner feels that Aurora would be happier as an only cat. 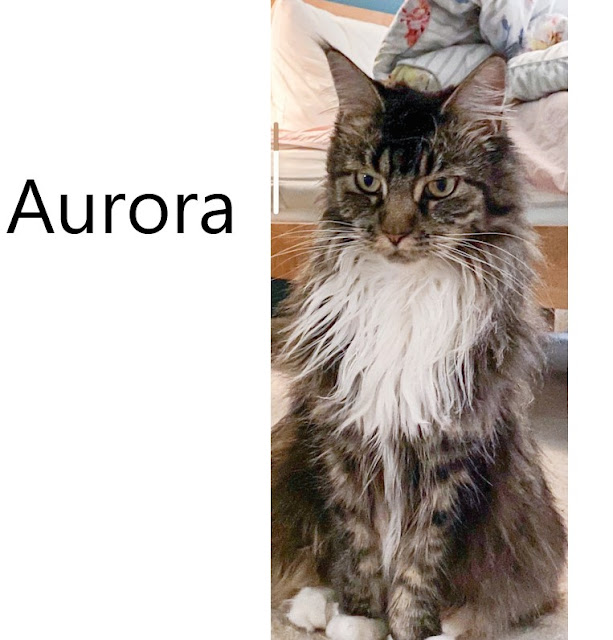 She is looking for the best home possible for Aurora. She is a three-year-old, brown tabby-and-white. She describes her as a little nervous until she gets to know you. She tends to hide but will get over it and is happy to be cuddled and enjoys a brush. Aurora needs time and attention and my guess is she would like to be in a home where the owner is around all the time and where it is quiet and calm. If you want to adopt Aurora you will have to pay a rehoming donation of £200 to the club.

And in South Wales there are two Maine Coon cats up for adoption through the club. Their owner can't keep them. They come as a pair. They are seven and six years old. Their names are Pippi and Mr J. They are both brown/grey tabbies and indoor/outdoor cats. They don't like dogs and the owner believes that they would be happier in a home without children.

They currently live in an area which is quiet near a river and a forest and therefore in their new home it would be great if they had access to a nice piece of countryside!

The owner says that they don't like brushing and grooming but that their fur is in good condition. Mr J has apparently lost his ruff. He is healthy and the owner has asked a vet what they think is the cause. It may be because Mr J is a little anxious due to the circumstances in which he is living although those are not specified. It appears that the home is not in an equilibrium at the moment and once Mr J lives in a stable home his ruff will grow back.

Michael Broad
The reason why I write for these blogs about cats, all of which are subdomains of PoC, is twofold (1) to try and improve the welfare of cats through improved knowledge i.e. it's about education and (2) for my own benefit, to keep me occupied, to give me purpose. Senior people need purpose. We need targets and goals. We need responsibilities. We need the burden of responsibilities because we are programmed like that.