Showing posts from December, 2020
Show All

What should Maine Coon cats eat? 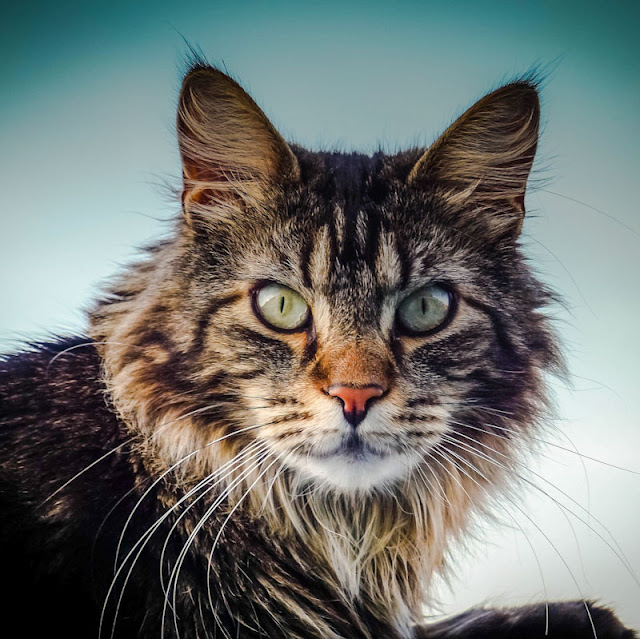 Maine Coon cats should eat the same food as any other domestic cat. It depends on your budget. But as you are living with a beautiful and probably quite expensive domestic cat you should feed your Maine Coon cat a very high quality diet. This means a high quality wet food diet with the occasional treat if you wish. Image by  Heinz Hummel  from  Pixabay   I have changed my mind somewhat about dry cat food. The best quality dry cat food, although unnatural, are not at all bad and are certainly acceptable for grazing from time to time. I feed my cat Hills Oral Care which I find to be a good food. His coat always feels very nice after he eats it. I think that that is a good sign. I am not sure about the efficacy of specialist oral care dry cat foods with respect to their ability to clean teeth. I don't really believe it but I'm not sure. The convenience of dry cat food makes it attractive and even the more expensive ones can work out more cheaply than wet cat food which goes off
Post a Comment
Read more 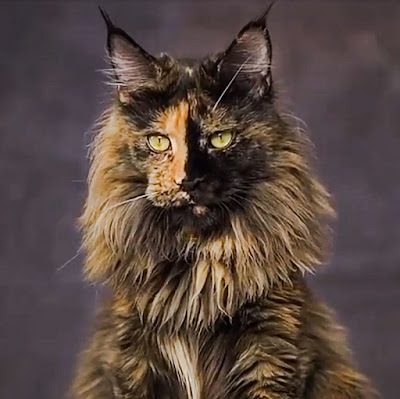 Maine Coon with "split face". Photo: Screenshot. This is a very impressive Maine Coon. As you can see she is a tortoiseshell and as you probably know almost all tortoiseshell and calico cats are female. There are a few male tortoiseshell cats (and this might be one of them). Their sex is caused by a genetic aberration because the genetics of tortoiseshell cats dictates that they are almost always female. About one in 3000 are male as I recall. Also, it is not that unusual to see this extreme pattern on the face which creates the appearance of a "split-face". This is not what is called a "chimera" but a normal variation of the tortoiseshell pattern. Sometimes you do see what some people call "two-faced" cats with this sort of face due to a sharply defined pattern down the middle of the face. But the genetics behind that is different to this normal tortoiseshell variation. This is a particularly extraordinary looking Maine Coon cat. Not all Maine C
Post a Comment
Read more 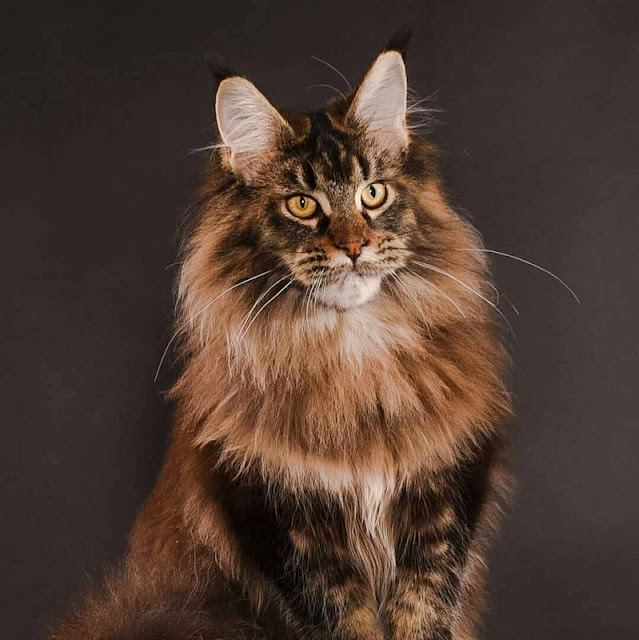 Here are 12 alternative origins of the Maine Coon cat. Some are clearly outrageous or fanciful and at the end of this list I tell you the one which is the correct one in my opinion (and as I go along I'll comment)! Maine Coon. Fabulous cat. Photo: in public domain on Pinterest. It is a cross between a house cat or a wildcat and a raccoon. Impossible genetically. The species are too different. It is a cross between a house cat and an American bobcat or the Canadian lynx. This is too fanciful. There is no evidence that this happened and anatomically the theory is unsupported. It is descended from 6 Angora cats that belonged to the Queen of France, Marie Antoinette. A sailor, Capt Samuel Clough of Wiscasset, Maine brought them to the state on board his ship, The Sally , together with other possessions belonging to the Queen. The cats broke free and fended for themselves in the New England countryside founding the breed. It is descended from Norwegian Forest cats which were sent to
Location: Maine, USA
Read more 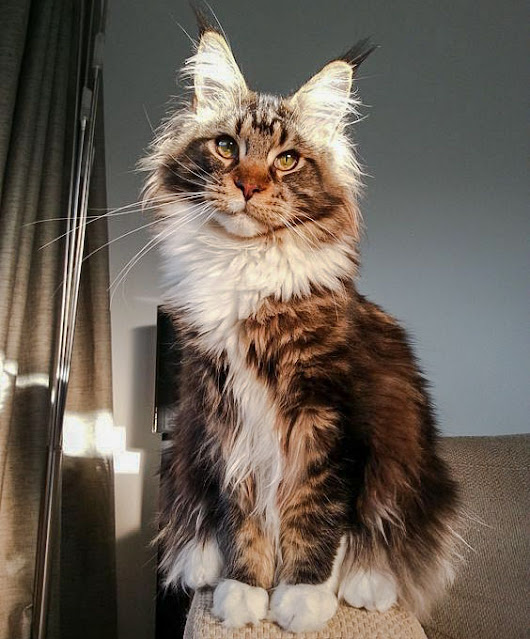 Richard H Gerardt is a former president of the Cat Fanciers' Association and a distinguished cat show judge. He also bred cats and therefore knows a lot about it. He makes one or two interesting points about cat breeding in his book The Complete Cat Book . The first point he makes which is of interest to me is that (and I'll quote him verbatim): "Male cats produce an especially high proportion of abnormal sperm cells, 25% on the average, compared to males in other species." Beautiful Maine Coon. Photo in public domain He said that if a bull had such a low level of sperm quality they would not be a suitable prospect for a stud. And he goes on to state that the more inbred a male cat is the more abnormal his sperm also is. This, then, makes him less useful as a stud. Therefore, a new breeder of cats should not select a male "that is too closely bred, that is, one with the same cats appearing over and over in his pedigree." The second point that he makes, and w
Post a Comment
Read more

Are Maine Coons half raccoon? 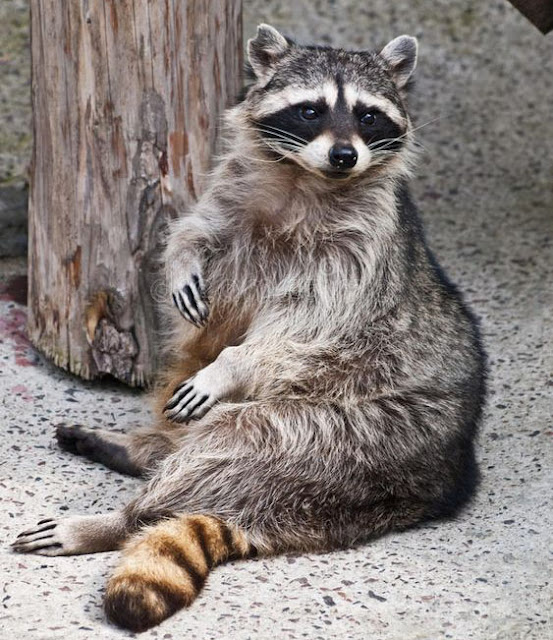 I can guarantee, as can almost everybody else, that the popular cat breed called the Maine Coon is not, positively not, half raccoon! How do we know for sure? Because it is genetically impossible. These are two very distinct species of animal and they simply can't mate to produce offspring. There are limits to mating. For instance, the first filial Savannah cat has a serval father (medium-sized wild cat species) and a domestic cat mother. It is quite difficult to breed first filial Savannah cats which is why they are so expensive ($20k). But the serval and domestic cat are the same species. Raccoon. Photo in public domain. But to take two entirely different species of animal and imagine that you can create a wonderfully exotic hybrid simply isn't feasible. It was a bizarre myth that the raccoon was part of this cat's heritage but it is simply untrue. It does beg the question why they decided to name this cat the "Maine Coon". The word "Maine" is a ref
Post a Comment
Read more

Today's Maine Coons are much larger and longer than the original 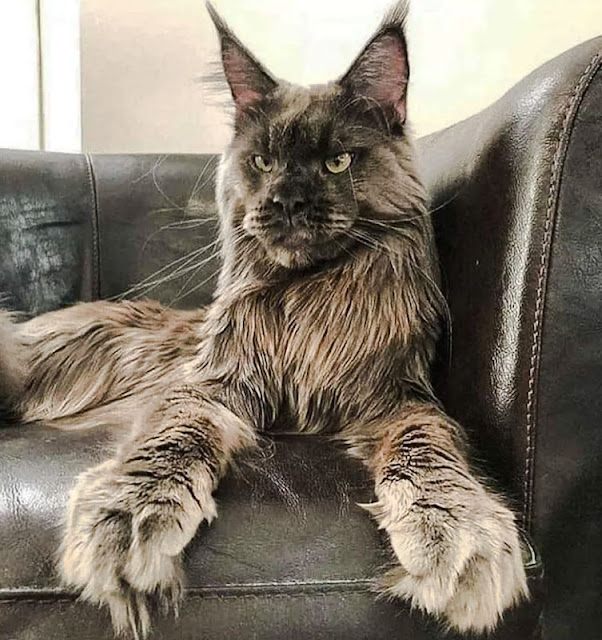 There was a time, during the early years when the Maine Coon's popularity was in decline that the cat fanciers struggled with writing what they believed to be the correct breed standard. There was competition between what Richard H Gebhardt describes as a "progressive standard" or one which was designed to "describe and preserve an existing cat" i.e. fix the appearance. At this time this cat breed was much more a standard looking cat which is probably why it failed to catch the imagination of the cat loving public of America. Maine Coon. Photo in public domain. A progressive standard is one which allows breeders to constantly "refine" the appearance as they might describe it. But this can lead to extreme breeding and extreme appearances such as is evident in the Persian and Siamese. There was a time, then, went Richard H Gebhardt says that cat fanciers asked, "is the Maine Coon cat simply the long-haired variety of the domestic, or American, sh
Post a Comment
Read more
More posts