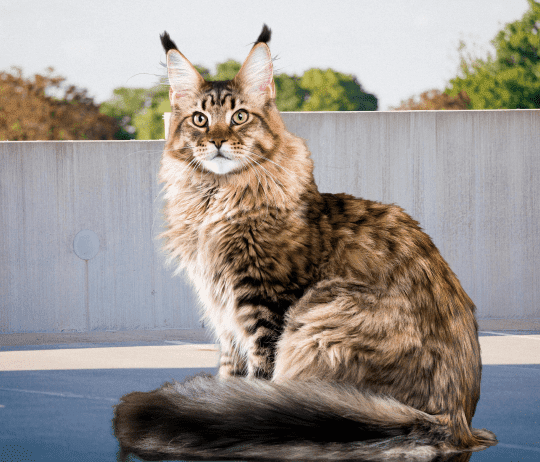 An investigation carried out in 2020 and published on August 21, 2020, found that dysfibrinogenaemia may be a hereditary condition in Maine Coon cats. They were investigating a report of afibrinogenaemic haemorrhage in a Maine Coon cat. Two littermates subsequently died from surgical non-haemostasis (not stopping bleeding) which suggested to the researchers that this was hereditable coagulopathy.

They concluded that "clinicians should be aware of the increased potential for non-homeostasis in this cat breed and consider assessing clotting function before (elective) surgery". What they mean is that if a veterinarian is going to conduct surgery on a Maine Coon cat which is not essential, they should balance the benefits of the surgery against the possibility that there may be a problem with blood clotting which would be a risk factor arising out of the surgery.

Maine Coon with a hint of tiger

This Maine Coon's appearance has a hint of the tiger. The coat reminds me of the tiger's and the relaxed way the cat is lounging adds to the impression. The face is definitely tigerish. This is a super-looking Maine Coon with a grey, striped tabby coat. A very relaxed and confident face. There is a cat breed which is designed to look like a tiger and you may have heard of it. It is the Toyger a.k.a. the toy tiger . The appearance of the Maine Coon is protected by the cat associations because breeders cannot outcross their Maine Coon cats. Outcrossing means breeding with cats of a different breed or random bred cats. This tends to dilute the appearance and takes the appearance away from the breed standard but it is incorporated into breeding to ensure the health of the cat. The tiger and the Maine Coon are almost identical in all respects except for their size and differences in appearance . You probably know by now that the original Maine Coons were barn cats in the 1800s in
Read more